Getting Into The Best Circus School Is Only The Beginning “Big Top Academy”, The Show Is About To Start!

Set in a fictitious circus arts boarding school, “BIG TOP ACADEMY” tells the story of an extraordinary group of young acrobats who dream of becoming professional circus artists. The series, the first ever live-action kids series for Cirque du Soleil, transports young viewers to the exciting and colourful circus universe. 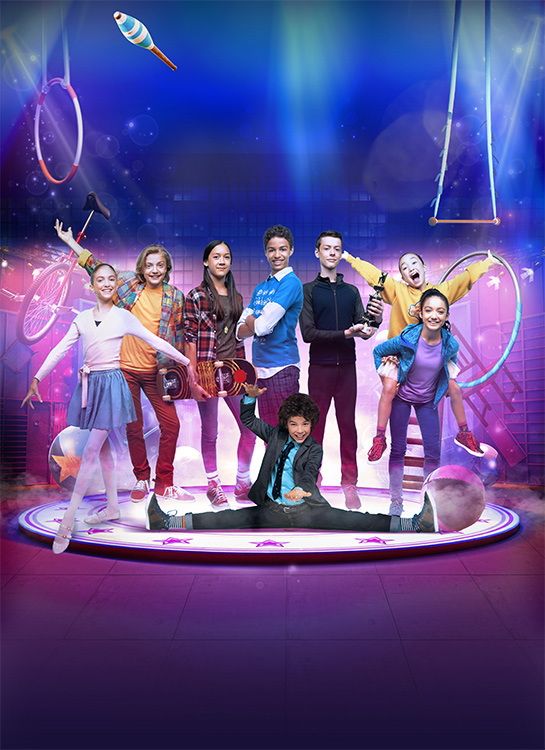 As the young group of students at BIG TOP ACADEMY strive towards personal excellence, they learn to work as a team and transcend their own limits. Fast-paced and high-energy, the series tells the story of eight students – Nicholas, Maxwell, April, Phoenix, Chase, Ella, Celeste and Axel – who hail from different walks of life and have a variety of skills: some are already circus artists, others come from ballet and gymnastics, while a few have no formal training at all. Heading up the school is the firm but friendly headmistress, Miss G., along with stern athletics director Sir Rayne and wacky teacher Ms. Martel. Miss G will mold the young students into the best circus artists they can be. At this prestigious school, the value of friendship is enhanced, the stakes are high, the risks are real, the rivalries are intense and the obstacles formidable.

In the premiere episode, viewers are introduced to Nicholas Zolta, a student at BIG TOP ACADEMY whose father was a legendary circus artist who attended the school in his youth but disappeared a decade ago while attempting a daredevil circus stunt. As the school year unfolds, Nicholas will discover a web of mysteries that all seem to lead back to his father… and Sir Rayne, who seems to know more about Nicholas’s father than Nicholas himself! Helped by his new friends, Nicholas will have to solve this enigma if he hopes to make the school not only a place for people to become great circus artists, but also a home where everyone is accepted for who they are.

It is produced with the financial participation of the Shaw Rocket Fund, the Canadian Film or Video Production Tax Credit and the Quebec Film and Television Tax Credit.

Discovery Kids is the leading pay TV network for preschoolers in Latin America, offering round-the clock programming for kids 4-8 years old. The channel celebrates the joy of being a real kid, welcoming all kids and celebrating their differences and uniqueness, while encouraging them to have fun exploring their world. ©2018 Discovery Inc., LLC, Discovery Kids and Discovery Kids’ logo are trademarks of Discovery Inc. LLC. All rights reserved.

Originally composed of 20 street performers in 1984, Cirque du Soleil Entertainment Group completely reinvented circus arts and went on to become a world leader in live entertainment. Established in Montreal, the Canadian organization has brought wonder and delight to over 190 million spectators with productions presented in close to 450 cities in 60 countries. Cirque du Soleil Entertainment Group currently has over 4,000 employees, including 1,400 artists, from nearly 50 countries.

Founded in 2000 and led by its passionate President, Jonathan Finkelstein, Apartment 11 consistently delivers quality, story- driven ratings successes to its global broadcast partners. The independent, Montreal-based creative hub has produced more than 250 hours of scripted and non-scripted programming. Taking an entertaining approach to discovery, Apartment 11 is recognized for series that encourage kids to ask questions and investigate big ideas. Apartment 11 collaborates often with international partners, recently co-producing Rank the Prank with BBC for CBBC, Nickelodeon and BBC Kids. The company is proud to have created ratings hits such as Prank Patrol (YTV), one of the first kids’ series to be formatted and sold to multiple territories, including the U.K. (CBBC) and Australia (ABC) as well as Mystery Hunters (YTV) broadcast worldwide on Discovery channels. In addition to its television series, Apartment 11 also connects with young people across a range of platforms with exciting interactive projects. Apartment 11 has won a Peabody Award, multiple Japan Prizes, Youth Media Alliance Awards and Gemini/Canadian Screen Awards, a Viewers’ Choice Kidscreen Award and has also been nominated for two International Emmy Awards. For more information, please visit www.apartment11.tv

As the technological extension of Ontario’s public education system, TVO’s vision is to create a better world through the power of learning. TVO provides learning opportunities for Ontarians through innovative educational products, in-depth current affairs, groundbreaking documentaries, and award-winning TVOKids resources both inside and outside the classroom. TVO is funded primarily by the Province of Ontario and is a registered charity supported by sponsors and thousands of donors. For more information, visit tvo.org.