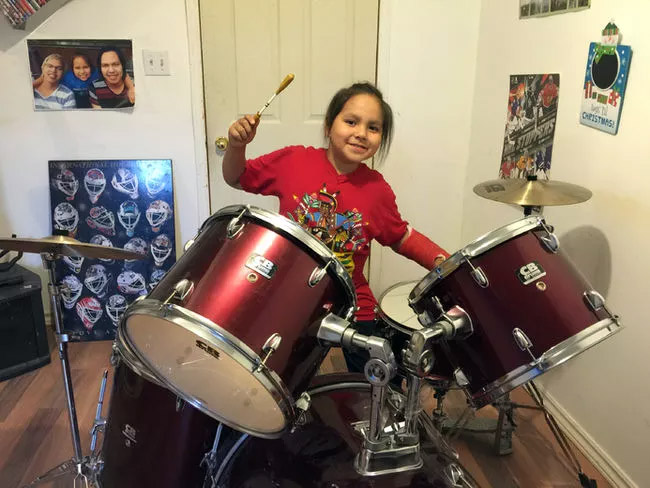 A new TVOKids program is shining a spotlight on the lives and culture of Indigenous children, including a pair of local youngsters.

Pahquis Trudeau, 8, and Cameron Manitowabi, 10, Ojibwe youth from Wikwemikong Unceded First Nation on Manitoulin Island, have each hosted an episode of Raven’s Quest, co-produced with the Apartment 11 production company and set to air next month.

Raven’s Quest gives viewers a day-in-the-life look at each boy’s hometown, family and traditions, both old and new – Manitowabi shares his artwork, has fun at the cottage and shows viewers how to harvest and braid sweetgrass, while Trudeau shares his love of drumming, singing and dancing, talks about the importance of his school’s eagle staff and reveals that he has never had a haircut.

“It made me realize how fun my life was, and how many fun and interesting things we do,” said Manitowabi, whose episode is to air on March 7.

“We” includes his mother, Heather, with whom he has been picking sweet grass on the Island for three summers, and who encouraged him to share his heritage with other kids, both Indigenous and non-Indigenous.

“I have been teaching him about it and this was his opportunity to teach others about our culture,” she said. “(We wanted) to teach about the cultural heritage here in Wikwemikong, the traditional medicines, why we use it, the symbol of it, to show him growing up as a dancer, and to teach the Ojibwe word – little things to inform others.”

“We were interested in kind of a day in the life of children, sort of handing the camera to them, so to speak,” Laxer said. “It really was kids talking to kids, telling kids about their lives at their level.”

Producers wanted to show the diversity of Indigenous children across the country, she said, and the different traditions which have persisted and been passed down for generation after generation.

“We wanted to show how beautiful many of them are and how much the kids love them,” Laxer added. “The kids loved sharing their lives with us.”

Trudeau admitted he was a little nervous, but also excited, and quickly grasped the importance of his opportunity.

“People can see what it’s like here and what it looks like,” said Trudeau, whose episode will air on March 19.

He took special pride in showing off the eagle staff, a sacred item belonging to Wasse-Abin Junior School in Wiky, which locals believe has its own spirit and helps to protect their community. Tasked with caring for the staff, Trudeau is shown singing to it and smudging, before passing it on to another student at a school powwow.

“It’s important for people to understand and know what we’re doing,” Trudeau said.

Laxer said Manitowabi and Trudeau, as well as the other hosts, were “amazing” in their roles.

She believes the show will strike a chord with viewers from many backgrounds.

“I certainly learned many things,” she said. “At the same time, I started to think about my own traditions in my life. That’s what would be interesting, to think about, ‘What are the things in my life that are passed down to me?’ I’m hoping that kids who watch will think about that, as well.”

First-of-its kind kids show offers exclusive look into the hearts of 20 Indigenous communitiesNews
Getting Into The Best Circus School Is Only The Beginning “Big Top Academy”, The Show Is About To Start!News